Avira Antivirus RescueSystem is a Linux-based boot disc which can efficiently detect and remove almost all the harmful and malicious programs. It can bring out your computer from a situation when your computer can no longer work due to a virus attack or some infection. It can recover your system and make it start working normally. In case your regular antivirus tool can’t detect what is slowing down or damage your computer then you must try this wonderful antivirus. Its deep scanning algorithms can find anything that is undetectable by the common antivirus tools. 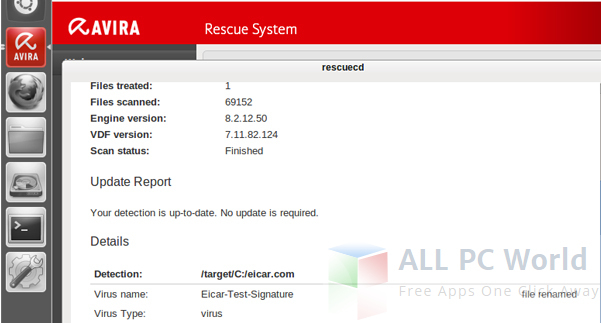 Moreover, you can create a bootable recovery disc for your system. It provides a multilingual environment which is basically in German language but you can change it by changing the flag at the bottom while in Rescue System utilities. One click update feature instantly installs the latest definitions from the internet. The advanced virus scanner feature is able to discover Malware, viruses and other such kinds of programs to move your system to a safer side.

Some of the enhanced features of  Avira Rescue System are

Before you download and install Avira Rescue System, make sure that your system meets the given requirements

Click the below link to download the standalone installer of Avira Rescue System for Windows x86 and x64 architecture. It is compatible with all the new and older versions of Windows.