PMD (Programming Mistake Detector) is a static Java Source Code analyzing tool that detects the common mistakes in the programming. This free download is a standalone zip installer for IDEs 32bit and 64bit.

If you want to find out the mistakes from your static code then you must try PMD. It is a powerful tool with a specific set of rules that are basically describing the syntax of the Java code. You can also set your own rules which will be prompted when that specific problem will arise. Typically there issues reported by PMD are not the genuine errors but they are meant to add more perfection to the code so that the efficiency of the code increases. If you don’t correct the reported errors, you code may work fine but it will be a bit less efficient. 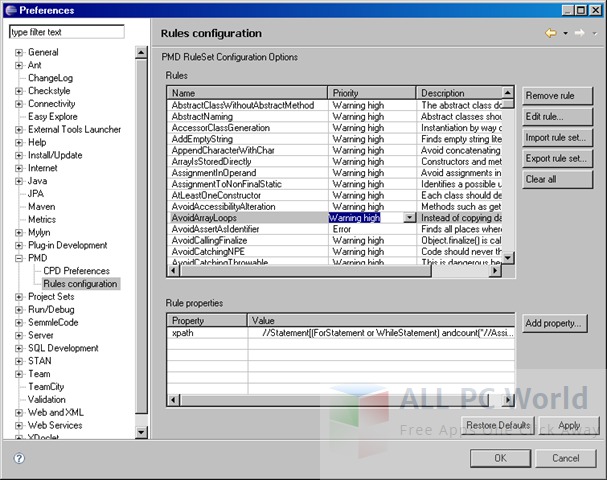 It can detect bugs that can be empty blocks in the code, dead code like unused variables and methods, empty conditional blocks, and loops. Detect the copied code, in the case of duplicate methods and other code. Programming Mistake detector is distributed under Apache License 2.0. and GPL. It is a completely free product with many other features. It has plugins for many Integrated Development Environments for Java development.

Programming Mistake Detector is a fully featured product with many advanced options. Some of the features of PMD are

Click the link below to download the zip file of PMD for you IDE. It is compatible with a wide range of Integrated Development Environments.